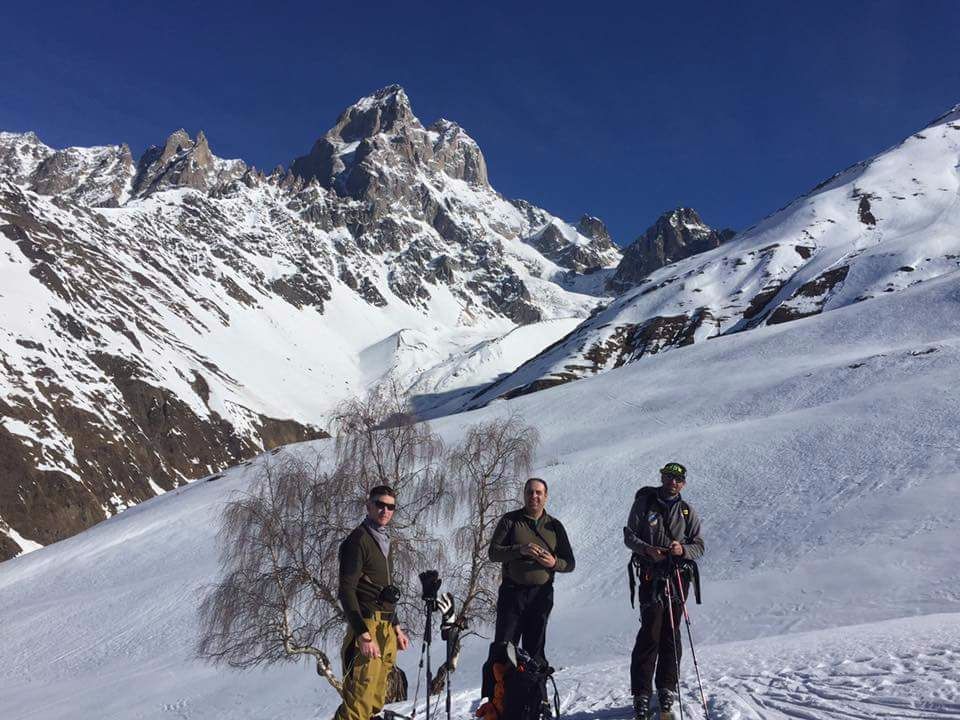 Ski touring in the Mountains of Svaneti, The Republic of Georgia

The Mogzauri Rent Team just returned from a late-winter expedition to Svaneti, an isolated, high-elevation region located in Northwest Georgia. Our mission was to scout out the best new ski touring routes in this spectacular part of the world. We succeeded in our goal and had a blast doing so.  Here is a quick recap of some of the highlights.

After an early departure and the long drive from Tbilisi, our excitement began to grow as we started to ascend from the lowlands of the coastal plain.  Twisting and turning along the serpentine, we dodged rock fall, avalanche debris, potholes, and giant boulders littering a path perched precipitously along vertiginous drop-offs. But it was only when the high, snow-clad peaks of Svaneti began to emerge above the cliffs of the narrow canyon that our collective pulse really began to quicken. Upon entering the Upper Svaneti Valley it becomes apparent how limitless the ski touring and ski mountaineering opportunities are in this little explored area. Over the course of our ski touring trip we sampled a wide variety of skiable terrain in Svaneti. A natural place to start is in the mix of evergreen and deciduous trees at the small Hatsvali resort near the village of Mestia. Here you have the chance for a day of fun in-bounds skiing and side-country touring while breathing in fresh air, adjusting to the elevation, and getting your bearings in the magnificent surroundings. Acclimatization and warm up day at Hatsvali resort

Hatsvali is, however, only a warm up to the real adventures that lie ahead. There are several choices for village-to-village tours that can be linked into multi-day trips taking you over mountain passes, past ancient ruins, and across glaciers. This offers you the possibility of enjoying the snow, sunshine and scenery along the way all while knowing the warmth and hospitality of your next guesthouse waits at the end of the day’s ski touring. Svans are a hospitable people and their cuisine is as rich and delicious as their characters. We returned to our guesthouse ravenous every evening and went to sleep satiated every night. Mestia, our base for the ski tour

Of particular note is the remote village of Ushguli, located at the top of Enguri Gorge in the farthest reaches of Upper Svaneti. Some claim that Ushguli is the highest continuously inhabited village in Europe. While this fact is debatable, it is assuredly a unique, remarkable place and has been designated a UNESCO World Heritage Site. Its formidable stone towers, standing frozen and silent in the light of dawn, will leave an indelible impression in the memory of anyone who is lucky enough to skin through their ranks in search of the powder that lies on the slopes and coulors above. Skinning up the slopes above Ushguli

If you climb the approximately 1,000 meters from Ushguli to the ridge top, not only will you be rewarded with fantastic skiing but with one of the most stunning skylines you have ever seen. In one direction you can see the traverse of the High Caucasus with the peaks of Ushba, Elbrus, Tetnuldi, and Shkhara visible. In the other direction are Layla and the mountains of Lower Svaneti. The Caucasus Mountains, is a paradise for ski touring and freeriding enthusiasts

If you grow tired of earning your turns, the new Tetnuldi Ski Resort is a great place for freeriding and lift-assisted touring. While the resort’s development is still in the initial phases, the current infrastructure still offers access to amazing off-piste terrain in a dramatic alpine setting. In the future, it promises to be even better. Skinning in the early morning Sun

Svaneti exceeded our expectations in all regards and it was hard to leave. Our reluctance to return home was only softened by the fact that we could look forward to the chance to return again and again with guests and friends, and share with them the secrets of this sublime ski touring destination.