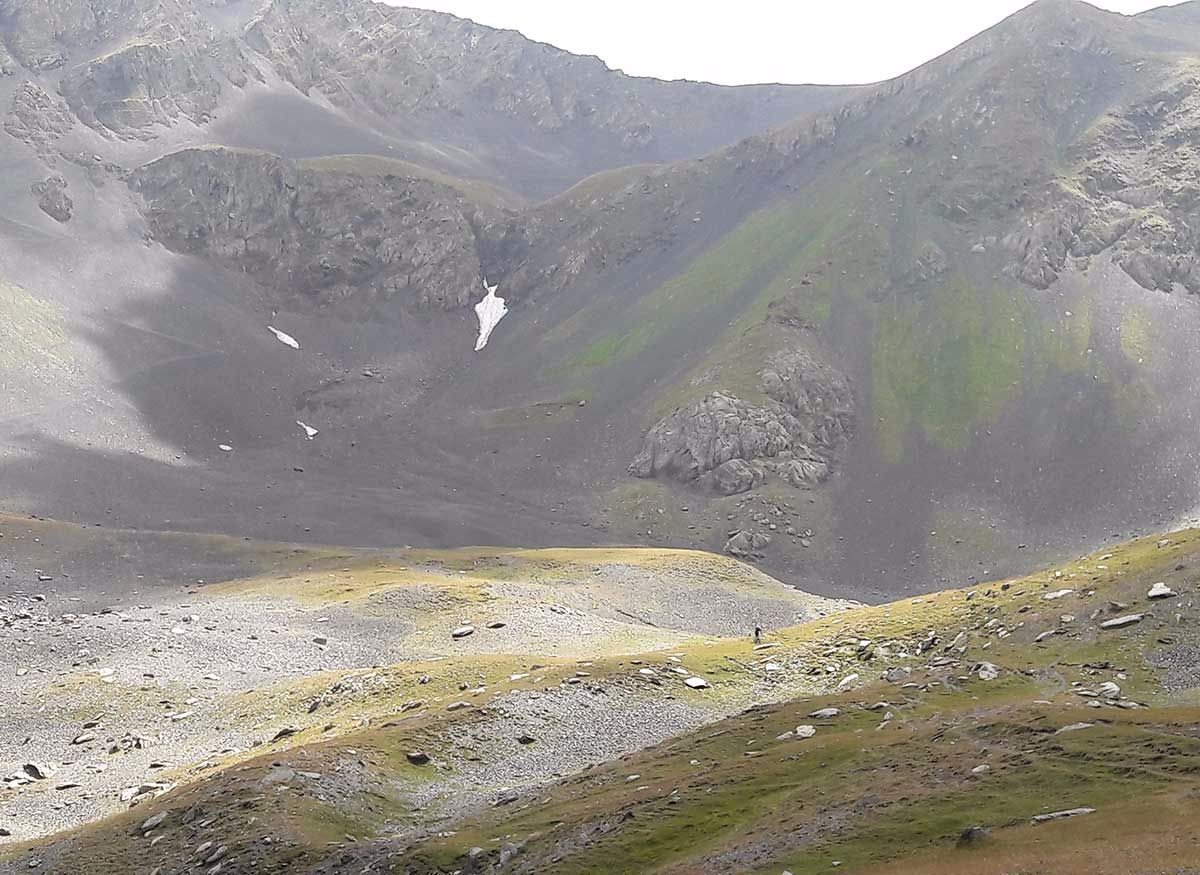 Descending from the pass

One of the most interesting parts of a job in the adventure tourism industry, in The Republic of Georgia, is been able to get out into the Caucasus mountains with a map, a compass (Okay… and a GPS!), a back pack and head into some unknown part of a region trying to find new trails for mountain biking and trekking. It can be quite hit or miss, there are plenty of trails in the high mountains used by the shepherds and villagers which are difficult to find and have a habit of disappearing in the most remote places. You can check google earth, check the maps prepare and plan only to find a particular trail has long since faded back into its surroundings due to underuse or natural erosion or it was mapped in the wrong place. On a map it can appear that a trail gradually meanders up the side of a valley only to get there and find its going almost straight up. Nevertheless, it’s an essential part of building new tours in order to offer our guests new adventurous places and one we take on with relish. The first of many Hike a bikes that day, with incredible views over the Caucasus.

Setting off early one Friday morning we loaded the bikes onto our 4x4 and once again headed for the Abano pass at 9700ft, it’s the highest drivable pass in the Caucasus and is the only way in and out of Tusheti. Cut out of rock and earth straight into the side of a perilously steep mountain it’s a great descent by mountain bike both on the way in and out. It’s a dirt and rock jeep track that many 4x4’s struggle with and is practically impossible to cross in any other type of vehicle. Nevertheless, we wanted to find an alternative route in so we had planned and plotted a route down one of the deep valleys to the side of the Abano Pass into the region, which is only used by shepherds. Heading West from the Abano Pass at 9700ft.

And so, after a five-hour drive to the top of the pass we left the vehicles and started climbing with our bikes up to 10170ft for the start of our route into Tusheti. It didn’t take us long to reach our first epic descent of the day, a single ribbon of trail drops off the side of a ridge and switches-back all the way down to a small but beautiful lake nestled in the valley 1000ft below before continuing down to the valley bottom at 6100ft. It was perfect, surrounded by rugged mountains on either side the valley is a remote and beautiful entrance into Tusheti. At the bottom of the valley there’s a shepherd’s settlement, though on the day it was empty, which lies at the convergence of two rivers. The trail here continues along the right side of the river until another two tributaries join. Looking down on the first descent into Tusheti.

So far so good, we decided to rest and eat whilst smiling like Cheshire cats at the descent we’d just ridden. Now we had a choice to make, there was a plan ‘A’ and fortunately a plan ‘B’. Plan ‘A” was to follow a trail back onto the ridgeline we had come across at the start of our descent it was clearly marked on the map steeply ascending to the right of the river from where we were. Unfortunately, there was absolutely no evidence of a trail, looking up the mountain side there was no trail further up either, just rocky cliffs and trees to start with leading onto open ground past the tree line. Over to plan ‘B’! This was a longer way out of the valley which meant adding an extra ascent and descent into the mix, but after searching for the start of the trail we decided a very steep barely visible overgrown path was the start and headed upwards… and up wards! It was a hard hike a bike and as we climbed the trail became clearer so we knew we were on the right track. Climbing a further 1000ft the trail leveled out and we could eventually ride before the trail started to descend again. Here the trail was rideable in parts but not all the way, Oh! How we wished we were trekking at this point. Looking back at plan ‘A’ to the left of the photo, plan ‘B’ on the bottom right and the pass dead center.

On the plus side the views were incredible and the feeling of been in one of the more remote areas of tusheti kept the adrenaline pumping. There were small villages dotted around the valley sides in the distance allowing us to keep our bearings though the trail here kept disappearing back into the landscape and was sometimes completely wiped out by landslides. It was tough going as we navigated the mountain sides eventually descending to a river again, to find our final ascent of the a 1900ft climb. It was getting late in the afternoon now, fatigue and the hard ascents were slowing us down. We knew we had to hit our final pass of the day before sunset and it was looking like a tall order as we struggled to climb the mountain side. A shepherd’s settlement deep in the valleys of Tusheti.

We kept pushing on until we came to a shepherd’s settlement near the top our climb. By this time, we were exhausted and stopped to rest and take on much needed water from their spring. The shepherds pointed us in the right direction for the pass and insisted on giving us cheese and bread for our onward climb. We set off climbing higher and higher eventually reaching the pass in the dark, the kg block of cheese and stone hard bread long since discarded to lighten our load. We had reached our final descent which had promised to be epic, though now in the darkness it seemed more of an obstacle with the added challenge of not having lights. We hadn’t packed lights as we had under estimated the toughness of the hike a bike which had been much harder than we’d anticipated. Fortunately, it was a mild night with clear skies and we even considered spending the night on the mountain and descending in the morning. We could see the village lights way below us and the sky by this time was impressively adorned with a myriad of stars. The only other trail users that day.

We headed down along the most obvious trail in the direction of our end point and as can be expected in the mountains the trail disappeared from time to time, it was marked on trees in some parts which made it easier and with a head torch and phone light between us we managed to descend into the village we’d been aiming for late in the night. We were happy to arrive and one or two villages, along with a few aggressive dogs came to greet us. Badly aimed stones (on purpose) saw the dogs off and the villagers drunkenly confirmed the road back to our vehicle pick up point. Following the trail into Tusheti.

The following morning, we packed and headed back to the Abano pass and out of tusheti with a pocket full of lessons learned, some superb single track descents to remember, sore legs and a perfect “TWO DAY TREKKING” route in the bag.